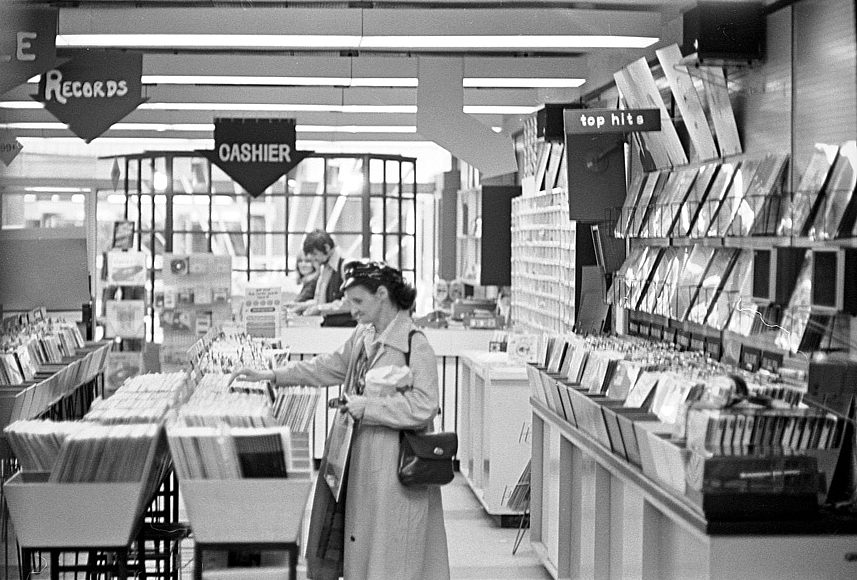 Customers flip through the records at the old Treble Clef store on Rideau Street.

The year 1957 was full of momentous events. In the fall, the Soviet Union started the space race with the launch of Sputnik-1, the first ever satellite.

The Avro Arrow was unveiled in 1957 to the Canadian public. Leave it to Beaver debuted on CBS and Ayn Rand published Atlas Shrugged. The very first Frisbee was sold and Elvis bought Graceland.

Meanwhile in Ottawa, that long ago fall, two young music lovers opened a store that changed forever the way music was consumed in the capital.

Harvey Glatt and Arnold Gosewich were the locals and the store, located on Slater Street just west of Bank, was called Treble Clef. 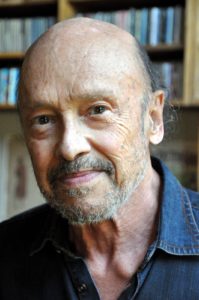 After two years, Harvey met his future partner Louise Jaffee, who was a music student at the Crane School of Music.

The two loved each other and they loved music.

Harvey says he would spend a good chunk of his allowance on records. In 1952 the 33 1/3 vinyl record had been created and he was a buyer.

“I learned a lot about classical music from Louise. Even though I did take classical lessons but I wasn’t a serious student.”

It was a pretty easy trip into New York City in those days and Harvey and Louise would often pay a visit to the legendary Colony Music Store on Broadway.

“More importantly we would go to Sam Goody‘s,” Harvey said. Louise refers to Sam Goody’s as the Mecca of music.

“I was just blown away by it. There was a classical department and there were people who knew folk and jazz and pop,” Harvey says.

In Ottawa when he used to shop for a record, he’d go into the basement of a store called Orme’s, go to a counter and ask for an album.

At Sam Goody’s, there were ‘browser boxes.’

“I was very impressed by being able to flip through the albums.And in each department there were people who knew the music and knew what was happening. You could get opinions, ‘If you like that you are probably going to like this.’

“That kind of thing didn’t exist in Ottawa at the time. There was no free-standing record store like that.”

At Clarkson, Glatt’s first-year roomie was Arnold Gosewich. Their musical collaboration started then. The two presented Dave Brubeck in a concert.

After graduation, Louise and Harvey moved back to Ottawa.

“I knew I wanted to be in the music business, but I ended up in the family business which was Baker Brothers” in LeBreton Flats. The company dealt in scrap iron, metal, auto parts and a service station. Harvey worked in the scrapyard, the auto parts section and at the service station.

Meanwhile, Gosewich was working for a grocery wholesaler and the two of them were both thinking about doing something else. 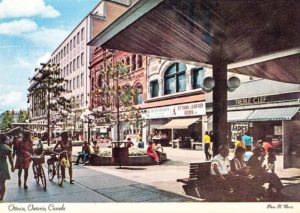 This old postcard of downtown Ottawa shows the front of a Treble Clef store.

Gosewich raised the idea of starting a business together.

Glatt suggested that there was a real need for a record store. “So we decided to do something like that. We’d open a little store. We each were able to borrow $5,000 from our parents. And we opened up on Slater just west of Bank Street on south side of the street.”

It was Gosewich who suggested the name.

Harvey answered, “‘That’s a Treble Clef ‘and there you have it.”

Like Sam Goody’s, the new store had aficionados on site to advise customers.

Harvey had good general knowledge of music and so he did the buying of the records. It was that work that put him in contact with an emerging network of music promoters and record company representatives.

One of those was  Montrealer named Sam Gesser who represented among other things Folkway Records.

With Louise on the cash, Glatt was bringing in music that people hadn’t been able to get in Ottawa before.

After a year, an opportunity to move to Bank Street north of Albert, near the Capitol Theatre, opened up and they jumped. But not with Gosewich.

He got an offer from a bigger record retailer and moved. Eventually that company was bought by Capitol Records and Gosewich moved again. He rose through the ranks there eventually becoming president of Capitol in Canada and then of Columbia Records.

Harvey, meanwhile, devoted himself to building up Treble Clef.

Opening the store also opened up another avenue for Glatt. In 1957 a couple of friends, Max Sternthal and Gil Levine approached Glatt about bringing the folksinger Pete Seeger to town.

The American was performing in Montreal presented by Sam Gesser.

“I knew Gesser,” Glatt said. So he called Sam up and he connected Glatt with Seeger’s representatives. The show, which opened with the bluesman Sonny Terry, was at Fisher Park High School and tickets were $2.50. Glatt, Sternthal and Levine made $50 each off the show.

And so another business was begun originally called Treble Clef Presents and later called Bass Clef, a name suggested by daughter Margot.

Glatt worked with Gesser and a Toronto promoter Vivienne Stenson. They booked in acts such as the actor/performer Theodore Bikel, Oscar Brand and theatre shows including one-person performances by the likes of Elsa Lanchester. Glatt would go on on his own to book acts into Ottawa such as Bob Newhart, Mort Sahl, Shelley Berman and Bill Cosby and musicians like Bob Dylan and others.

Meanwhile the store was growing and new outlets were coming on-stream. A Rideau Street outlet started the expansion. It opened in the early 1960s near today’s William Street Mall.

The 1960s and ’70s were good to Glatt and Treble Clef. He was bringing in more big names including Jimi Hendrix, Joni Mitchell and Johnny Cash, to perform at venues like the Capitol and at Le Hibou in which he had invested. He was also managing bands such as The Children and singers such as Bruce Cockburn, James Leroy and David Wiffen.

Eventually Harvey became interested in launching an FM radio station in Ottawa along the lines of CHOM-FM in Montreal and CHUM-FM in Toronto. He had been a DJ in his university days and he was also a sportscaster on campus announcing hockey and baseball games … sports he knew something about … and soccer and basketball too. He had to learn about those. The radio bug was still there though and by 1977 he had launched CHEZ-FM.

His focus was now on the radio station and so he sold a majority stake in Treble Clef, keeping a minority stake. There were now as many as 23 stores, including a couple in Edmonton, he said, including what were called SuperClef stores.

As Harvey shifted his attention to CHEZ, the new majority owners continued to expand the business, but unfortunately the expansion became entangled in a severe recession that was especially deep out west. Treble Clef went into receivership. The recession also took down a small record label that Glatt had founded called Posterity Records along with a distribution company called TCD.

The next few years were not easy. The radio station was not bringing in a lot of profit at the start. They lived frugally, Louise says.

Eventually, though, Glatt was back on his feet and expanding his radio business, picking of stations in places such as Calgary and even in Smith’s Falls where he bought what was then known as CJET.

He sold the radio stations in 1999 and invested in True North Records and remains on their board.

Many of the musical experts who worked in the Treble Clef stores joined Glatt at CHEZ including the late Brian Murphy and Kathie Donovan, who went on to work for CJOH-TV on Regional Contact.

Glatt is a hometown guy. He never left, even though he could have. Louise says Harvey was in his nest, “his hometown nest.”

Today he’s still actively supporting music in the community including sponsoring concerts for the Ottawa Chamber Society. Recently Harvey and Louise made the recording of two CDs by the NAC Orchestra, conducted by Pinchas Zukerman, possible.

Louise says Harvey was never a boss in his businesses. “He never said someone worked for him. He always said they worked with me.”

Harvey says “I often thought of myself as being a bit obsessive compulsive and when I like something … food or music … I want other people to like it too. Sometimes I go overboard and do it too much.”

Treble Clef was a true family business. In the early days, the Glatts would work in the store all day and head home to have dinner each evening with their three children. And then they’d head back to the store to do inventory.

Nowadays, he’s watching with keen interest the musical careers of his grandchildren.

Grandson Adrian Simon has entered the music business and is co-managing an Electronic duo  called Loud Luxury. And Glatt can talk the language of EDM, streaming video and digital music with the best of them.

And granddaughter Jenna is a classically trained soprano who is building a singing career that her grandparents are watching closely. She has just released a new album of music called Forever that has a strong soul, R&B and jazz influence.

This is where the heart of this story is: Love of music, love of family and love of one’s hometown.

Chamberfest: The many paths of Ensemble Variances' Thierry Pécou

Ottawa Writers Festival: The incredible lightness of being Tomson Highway