Dionne Brand has always been an ambitious writer. Her novels and her collections of poetry are always thoughtful and complex.

But she seems to have outdone herself this year with two new books; one called The Blue Clerk which has been nominated for a Governor General’s award for poetry and the other is a novel called Theory.

The books aren’t lightning bolts however. Both have been percolating, maybe steeping is the better metaphor, with Brand for awhile.

“The Blue Clerk began perhaps in 2009 and Theory began five or six years ago,” she said in a phone interview.

The Blue Clerk is about what is written and what is not.

“It did start from the idea that writing is a negotiation between what is written and what is withheld. I was really interested in what is withheld and who holds that. How is that contained and uncontained. It was this uncontainability that I started to think about.” 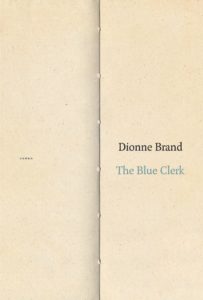 Writers always have thought-fragments of thoughts, or insights, or bon mots, that are not used. These scraps, these disparate chunks are arranged by The Blue Clerk who is an archivist.

For Brand, the question is: “How does one write all the things that have been withheld. The figure of the clerk arose to be the person who holds all that is withheld, both disparate and pointed, she added.

“The clerk holds those thoughts that the author doesn’t quite know what to do with yet.” These bits and pieces are not collected could ready to be turned into something.

That Brand is revealing her writerly self here is obvious.

“Nobody else is writing. There is only me so far.”

So what does she withhold?

“Things that seem unfinished. All that is in that text and more. The text contains 59 versos and there are sub-versos of the 59 and then there are unnumbered versos. It could be elaborated even more.

So, to pursue the point, did she withhold anything from The Blue Clerk? “No doubt,” she said with a laugh. “The whole argument is that for every right hand page that is good and beautiful that the author produces, there are multiple left hand pages that are left out.

“There is no conclusion here. The argument or discussion is circular.”

That provides a useful segue to talk about Theory, in which the curious reader is taken for a ride in the mind of an unnamed female narrator who seemingly is incapable of finishing her PhD thesis.

“Those three engagements with those three lovers is theory making.”

The book is unsettling and uncertain. This is what Brand seems to have wanted.

“It has to do with our reading practices and what we need nailed down.” While the reader is uneasy, the “narrator isn’t the least bit unsettled in her life and what she is describing.”

Brand, who teaches at the University of Guelph in the school of English and Theatre Studies, is certainly taking a poke at academia. The narrator is battling with the predilection in pedagogy for the theory du jour … those ideas that are ‘trendy’ and yet do not attend to the work she is trying to produce.

Brand said this book flowed from her interest “in the unfinished life of someone who thinks there is this thing that he or she must do but instead the person keeps being drawn away.” That can lead one into a career they truly hate. 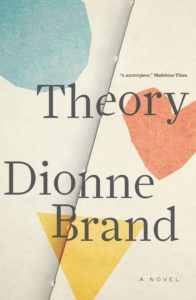 This is the case with the narrator’s brother who had wanted to study literature but instead ended up working in a car company with his father. This is the path not taken.

“The narrator thinks her life is to write the theory of everything. So I thought I’d the book that name also. You would rarely think a novel would be called a theory. That is the other mix of it. The novel is also all of the three ways of thinking through these three lovers for the narrator is creating a kind of a theory too. In a sense the novel becomes the narrator’s thesis and it is bracketed with the footnotes. It begins in a footnote and it kind of peters out in a footnote.”

Theory was a very “generative” word for Brand.

The word Theoria has another definition which is the study of beauty. This is something the narrator is definitely engaged in.

Brand says she never thinks of what people will do with their books … “except enjoy them. With Theory I hope the reader enjoys my respect. Theory doesn’t build a physical world. You are in the mind of the narrator. The narrator trusts that you know what she knows and you are travelling with her.

“You understand her pique and her anxieties and why she is somewhat surprised by some of the people she meets. And why she hates them and also the ideas that she is proposing. She just thinks you’ll come with her and that’s will be a good thing.”

The narrator also trusts the reader to engage in what she will engage in.

“She knows the reader will be sympathetic about some things and put off by others. She is plain and rude sometimes. She is also very self critical.”

We all go on these journeys in our heads. We have all these presumptions about other people that roll around in our heads. Often our own ideas of people are just plain wrong sometimes even of the people closest to you. This is dangerous territory as narrator finds out.

“The three women lovers: I don’t think that the narrator really knows them. She might totally be misinterpreting these people. We realize that she does because none of the three relationships last. She is confronted by her own misinterpretations. They send her in the wrong directions.”

One of the lovers, Yara, even offers a direct challenge to theory. She is an artist engaged in doing. This is a sharp criticism and illustrative of the tension between theory and practice. Sometimes theory needs practice and sometimes practice needs theory, Brand said.

The Blue Clerk (McLelland & Stewart)
Theory (Knopf Canada)
Dionne Brand
In town: The author will be at the Ottawa International Writers Festival on Oct. 26 and 27. For more please see writersfestival.org.

Ottawa Writers Festival: Esi Edugyan finds her voice in the past

Ottawa’s Frances Boyle up for major writing awards for...