“I was a fan,” she told ARTSFILE during an interview about the Canada Scene concert Oscar, With Love. “I had been to his concerts in Rochester and in New York City when I was living there after university.

“I wound up in Sarasota, Florida, and I was working at a restaurant there. It was a fish restaurant.”

Kelly was good at her job and in February, 1981, she had just been made the manager of the restaurant.

“Oscar was playing in Sarasota but I couldn’t go. I was working that night.” The restaurant was one of two that stayed open late into the night.

“We had a little trio that played in the bar and to keep the bar open, we had to serve food. Oscar always ate dinner after his concerts, not before, and so he was always looking for a place to eat after a show.” 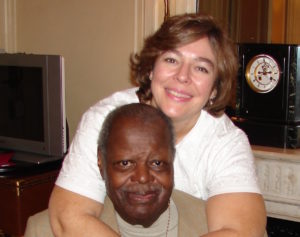 Kelly and Oscar in Paris in 2006. Photo courtesy Kelly and Celine Peterson

He was told there were two options: a French restaurant and a fish restaurant.

“Oscar said, ‘A French restaurant in Sarasota, Florida? I’ll take fish’. And he walked in.

“I was on duty and I recognized him right away. I told him I was a fan and we chatted. When he was leaving, he handed me his business card and said ‘If you want to come to New York (to see him in concert), call me and you can be my guest’. I thought ‘How sweet’.

“Never in a million years would I have done that, but it made me happy. It was a nice thing to do.”

At that point, Oscar’s taxi had not shown and Kelly drove him to his hotel.

He called several times from February to June, she said.

“He would talk about his shows, and ask about what I was doing. We developed a friendship. He also always asked ‘Are you going to come to New York?’

“Finally I asked, ‘Why?’ He said ‘I just want to get to know you and I have the means to bring you to me’.” That honesty worked and she said yes.

It was going to be a four-day weekend over the July 4 holiday. The restaurant was closed for much of it and she swapped another day with a colleague. When she told her boss what she was doing he told her she couldn’t go.

“I said, ‘Then you are going to have to fire me because I’m going. I’m not missing an opportunity to go to a jazz festival with one of greatest jazz musicians all time.

Soon, though, she did move on because the friendship with Oscar became an affair of the heart. They were married in 1987.

Canada Scene: For the love of Oscar, Kelly Peterson is sharing his legacy

Music and Beyond: Bold for brass, Jens Lindemann is on a mission to trumpet the horn